Born Ruth Goldstein on January 13, 1903 in New York City.  She was raised in New Brunswick, New Jersey. Her father was a rabbi.  In the summer of 1925, at the young age of 22 years old, she was hired by Metro Goldwyn Mayer as chief portrait photographer--the only woman doing so for the Hollywood studios at the time.

About Bull's relationship with Louise from 'Glamour of the Gods' book:

After Clarence Sinclair Bull was doing the most time-consuming gallery sessions, Ruth Harriet Louise was hired in 1925 as MGM's portrait photographer. This was not a demotion for Bull, as Louise reported directly to Pete Smith, the head of publicity, and Bull's dutied remained unchanged. Still, Louise and Bull seem not to have got along, and he never mentioned her in interviews or his writings after she left MGM in 1929. Louise's work, however, did influence Bull, who started to emulate her soft-focus pictorialism in 1927. Perhaps challenged by Louise's talent and craft, by the end of the 1920s Bull had matured as a photographer. Though sometimes outshone by Louise in the late 1920s, and later by his colleague Hurrell in the early 1930s, at his best Bull was equal to both. Bud Graybill, who shot stills under Bull's supervision for over twenty years starting in the mid-1930s, described him in a letter to Kobal (dated 29 January 1978) as 'the quintessence of photographers. His negatives were near perfect in exposure... the imaginative work he did over a period of roughly 40 years was never topped.' After Louise left MGM at the end of 1929, Bull distinguished himself as Garbo's principal photogragher, which must have made him the envy of his peers regardless of studio.

She decided to retire from her career in 1930 to marry director Leigh Jason.  Sadly, after ten years of martial bliss, she died on October 12, 1940 from complications from childbirth in Los Angeles, California.

From the book 'Glamour of the Gods', it further adds to Louise's biography:

Louise's brief reign as portrait studio chief lasted from mid-1925 to the end of 1929. To Louise goes the credit of being the photographer who fashioned Garbo's face into the timeless visage still immediately recognisable worldwide. Just twenty-two when she joined MGM in summer of 1925, Louise lost her job to George Hurrell four years later. Throughout the 1930s she occasionally took private comissions photographing stars such as Anna Stern (in 1932) and Myrna Loy (in 1935).

Louise died in childbirth in 1940, utterly forgotten by an industry she had worked assiduously to document. John Kobal avidly collected her original prints and acquired hundreds of her negatives. Of all the photographer's he introduced in his book in "The Art of the Great Hollywood Portrait Photographers," Louise's career was most in need of rehabilitation. Even her gender, which set her apart from all her contemporaries, had been insufficient reason to keep her memory alive.

Louise was among the first Hollywood photographers to break away from the old-fashioned convention of staid portrait shots and introduce the nuance of her sitter's perosnality. When she photographed stars in costume she attempted to find something of the character being portrayed. Kobal noted that she was 'in the vanguard of the phtographers who would revolutionize Hollywood portrait phtography.' Hollywood portraiture before Louise documented strong personas: Swanson's glamour, Chaplin's tramp, Pickford's waif. Louise took the screen personas of her favoirtie siters, such as Lon Chaney and Joan Crawford, and in her photograghs humanized them while never letting their star lustre diminsh. 'There is about Louise's work,' wrote Kobal in 1980, 'delicacy, a shy, appealing privacy, that established an immediate bond with the viewer," Her sujects liked her and trusted her, including the elusive Garbo. The two young women worked together, starting with Garbo's first portrait session in Hollywood, two months before she appeared on the set, through her ascent as MGM's greatest female draw. Louise's sensitive touch, along with the work of MGM's brilliant cinematograhers combined to create the face that enthralled moviegoers.

There has been discussion in Hollywood literature as to how much Louise relied on full-length shots, which she would then crop to make half-length or close-ups portraits. Kobal may have started this notion when he wrote about Louise. Although cropping was and remains a useful tool in most photographers' practice, in fact Louise took as many close-ups and (especially) medium shots as any of her contemporaries. Kobal identified correctly that many of Louise's famous compositions were derived from cropped negatives that found their final form in the darkroom. But Louise's surving negatives (numbering in the thousands)demonstrate without question that Louise shot regularly in close-up and medium shots and these also formed the basis for many of her most important photographs.
A couple of her relatives were also notables in Hollywood: her brother was director Mike Sandrich (he directed many Fred Astaire and Ginger Rogers musicials) and her cousin was silent film actress, Carmel Myers.

She took over 100,000 photographs during her stint at MGM and now she is considered on equal turf with other great photographers such as George Hurrell and Clarence Sinclair Bull among others.  This also makes her original vintage photographs worth a pretty penny at auction as well.

I highly recommend the book, Ruth Harriet Louise and Hollywood Glamour Photography by Robertson and Dance (2002).  Here is a link for the book:

The photos below show why she is on par with Hurrell and other greats: 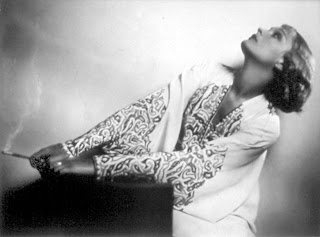 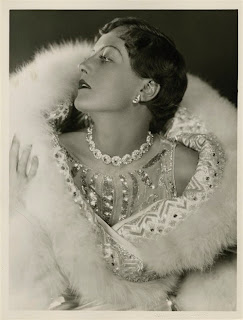 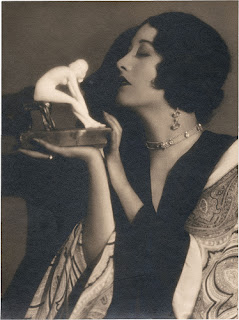 She took many spectacular photos of Joan Crawford... 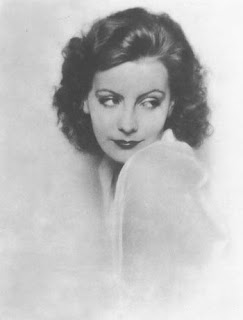 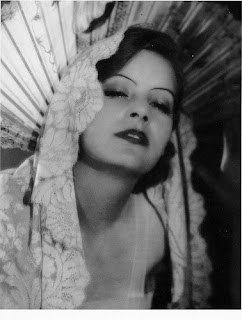 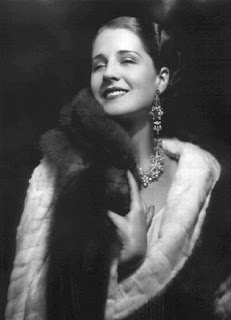 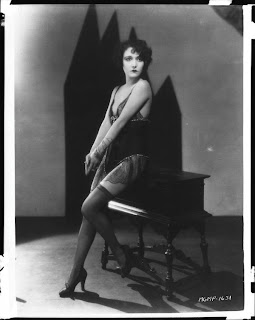 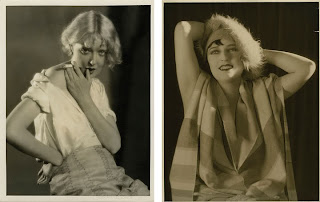 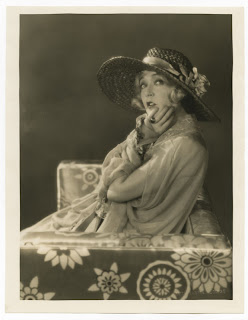 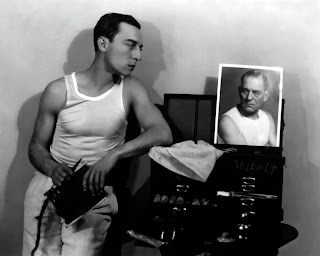 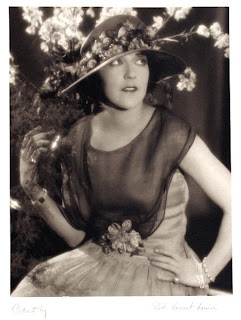 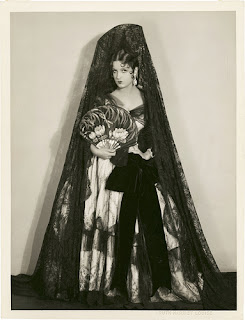 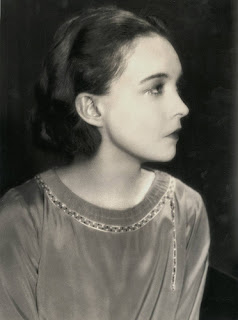 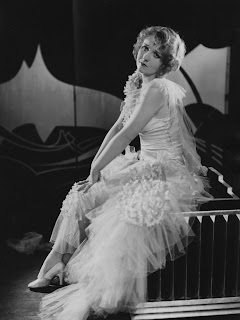 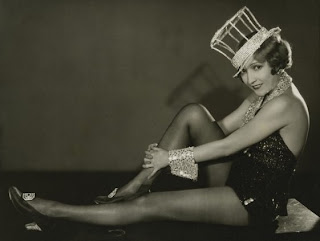 An example of her embossed stamp. 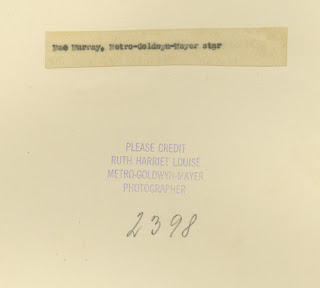 An example of her ink stamp which is also sometimes in a dark red color. 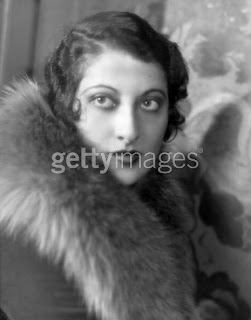 This is what the great lady Ruth looked like herself, just like one of the many stars she photographed.

Ruth and one of her greatest subjects, Crawford below: 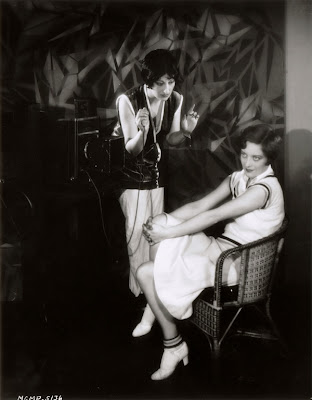 Posted by Don't Forget the Illustrator! at 6:20 PM