What is there to say about the legendary Hollywood photographer Clarence Sinclair Bull that has not already been said?

One of the most well known and--along with George Hurrell--one said to have helped invent the modern idea of Hollywood Glamour in photography.  Bull was born in Sun River, Montana (some sources say he was born in Michigan) in 1896.  For a time he studied with the great Western painter Charles Marion Russell.  But his real interest lie in photography.

He went to Hollywood in 1918 and became an assistant cameraman for Metro Pictures.  During breaks from film production, he began taking photographs of the various stars of the time.  In 1924, when Metro Pictures became Metro Goldwyn Mayer, Bull became head of MGM stills department.  He remained with the studio until the end of his career.

Bull was very well accomplished in everything to do with his specialty from lighting to printing and retouching.  He photographed many of the first-rate stars of the day including Elizabeth Taylor, Clark Gable, Joan Crawford, Leslie Howard, Katherine Hepburn, Gary Cooper, Hedy Lamarr, Vivian Leigh, Spencer Tracy, Ava Gardner, Grace Kelly, Jean Harlow, John Gilbert, among many others.  Of course, he is extremely well known for his numerous photographs of Greta Garbo.

Katherine Hepburn said of Bull:  "One of the greats.  Clarence Bull!  And the National Portait Gallery!  WOW!"

From the book, 'Glamour of the Gods':

Clarence Sinclair Bull's long association as a photographer with the studio that would become Metro-Goldwyn-Mayer began when producer Samuel Goldwyn hired him in 1919. Managing to survive the commotion of the consolidation of Hollywood in the early and mid-1920s, Bull found himself at the helm of MGM's stills department when the studio was formed in 1924, and stayed there until retiring in 1961. The enormity of MGM's output of films in the 1920s--they advertiesed a new feature every week--saw Bull's domain grow. He was responsible for managing MGM's staff of photographers and the large support crew of technicians needed to develop, re-touch, print and collate the hundreds of thousands of prints distributed annually by MGM's publicity department. At least one photograph from the 1920s shows Bull with twelve stillsmen who juggled the task of shooting photos on as many as a dozen films that might be concurrently in production. At MGM, like the other studios, these men--and it was an almost exclusively male profession--worked six days a week and often long hours each day. Generally one photographer was assigned to a production and, as filming was underway, he would document each scene using an 8 x 10 view camera. These cameras not only had lenses with sharp resolution, but contact prints could be made from the negatives quickly and in enormous quantities. The stills made for each film were numbered sequentially and gathered together for a book. Stills photographers also created the images used for poster art, lobby cards and other forms of advertising conceived by imaginative publicity chiefs and their staffs.

In later years, the famous documenter of all things Hollywood, John Kobal inherited the extensive work of Bull after he became good friends with Bull and his wife, Jeanne. So many of what is now known as the Kobal Collection contains Bull's work.

Note: Read more about Bull in the post about Ruth Harriet Louise:

During the 1920s, Bull continued to take portraits (even though he was a very busy man with administrative duties.) Chances are, if you have seen a portrait of Garbo other than Edward Steichen's iconic image, it is the work of Bull. With the exception of one session, Bull and the reclusive actress worked together exclusively in the portrait studio from 1929 to 1941 and their collaboration resulted in a body of imagery unmatched in Hollywood photography. Reminiscing with Kobal, Bull spoke of Garbo's extraordinary concentration and described her working methods as 'businesslike.' She was 'his easiest subject,' surprising given Garbo's status as the studio's biggest star. Garbo was one of Kobal's favorites, and he took care to understand her sittings with Bull to produce a limited-edition portfolio of five Garbo photographs printed under Bull's supervision from his original negatives. Bull died in 1979, just as the first portfolios were prepared.

It seems that every star who worked at MGM was photographed by Bull at least once. Paramount's biggest male attraction, Gary Cooper, was loaned to MGM in 1934 to co-star with Marion Davies in Operator 32 (1934). Bull and Cooper had a short session together on 17 of April 1934 and the results were splendid. He infused Cooper with a sleek, polished glamour that was as unusual for male subjects as was the cigarette dangling from his lips. Old timers and newcomers all had the chance to work with Bull, including vaudeville alumna Marie Dressler, who for a short time in the early 1930s was Hollywood's number one draw, and the ingenue Lana Turner, who at twenty was co-starring with Clark Gable in Honky Tonk. Bull started experimenting with color photography in the late 1930s, making color exposure of Garbo first in 1936 and again in 1941. In the late 1940s and throughout the 1950s he worked extensively in color recording, among others, Elizabeth Taylor at the moment she was being considered for adult roles.

Bull presided over a team of talented stills photographers, some of whom occasionally made portraits, generally on the set including the great Bert Longworth (see his own post). Longworth took stills for Garbo's first three pictures and his images of Garbo and John Gilbert in a clinch for 'Flesh and the Devil' (1926) are the quintessence of old-time movie romance. He left MGM in 1927 to work for Warner Brothers.

For a more detailed telling of his wonderful friendship with Garbo and of their artistic photographs created go to this highly recommended site:

When you find Bull's vintage photographs for sale at auction, the auction will usually say that his photographs are silver gelatin photographs and that they are 'dodged and burned.'

For a detailed description what is meant by the terms of 'dodged and burned,' here is a link:

For more on the silver gelatin process go here:

His photographs are also blind stamped (embossed) with his name and there is a rubber ink stamp also showing his name on the back of the prints.  For some photos there will appear a snipe (a detailed synopsis of the star, film and date).  And some photographs even have a ink stamp of the press agency that submitted the photo for publication.

Here are some examples and more of Bull's highly artistic photographs of the stars of yesterday... 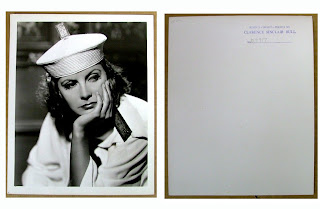 Above an example of the rubber ink stamp for Bull's work. 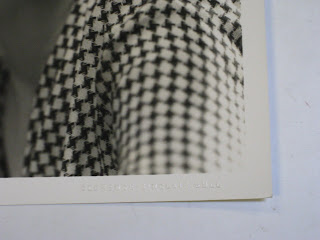 Example of a blind (embossed) stamp above. 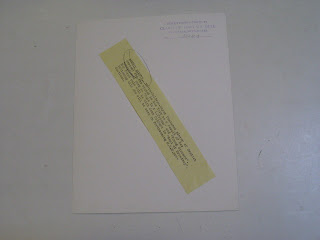 Example of a press snipe.

Here are some examples of the classic style of Bull's photographs: 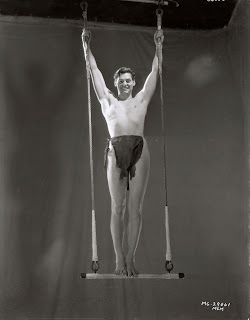 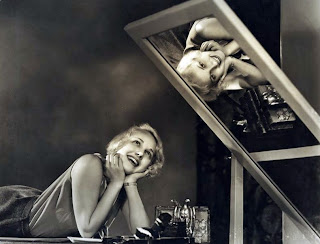 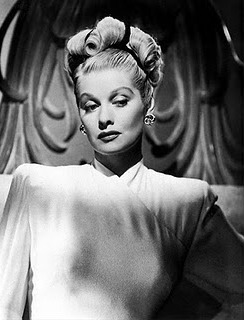 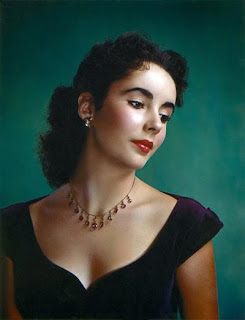 A color one of a young Elizabeth Taylor. 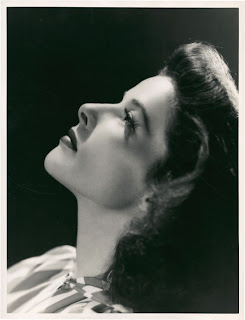 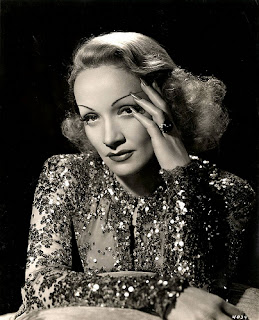 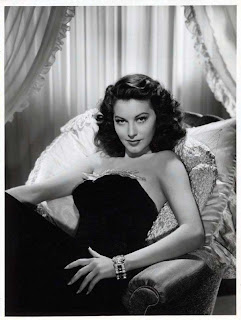 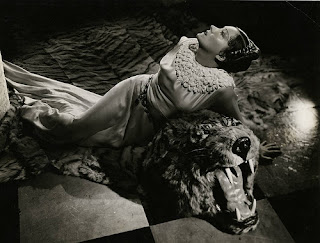 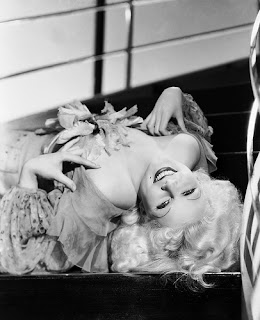 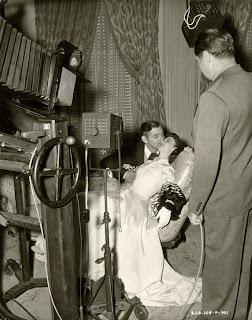 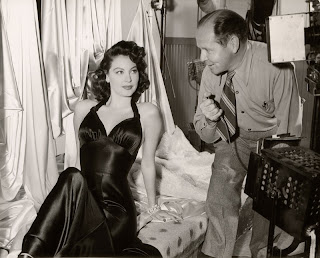 Ava Gardner with Bull and below one of the photos that resulted from that setting. 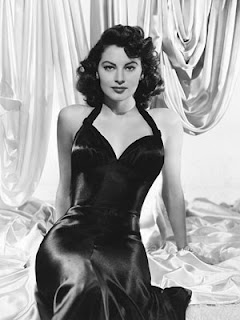 Bull with Nelson Eddie and Jeanette MacDonald.
Posted by Don't Forget the Illustrator! at 1:52 PM